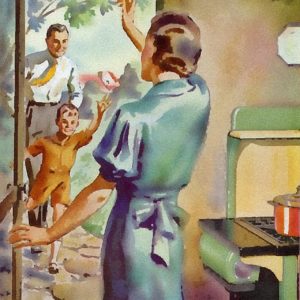 Have you ever considered why you feel the way you do about stuff? Have you ever questioned your tendency to shove things out of sight, hold onto items or keep your belongings organized “just so?” While many factors can influence our relationship with material possessions, one that we might be slow to recognize is our family of origin. Recently I’ve become aware of how often clients cite their families when explaining their proclivities. Those we spend time with when growing up can play a significant role in how we relate to possessions, impacting both our expectations and behavior in ways of which we may not even be aware. As you reflect on your own family, consider these three possible influences.

Everyone grows up living in a physical space and interacting with tangible items. During childhood, the things we own, where they are stored, and how long they are kept is largely directed by the adults who run the household (typically parents and grandparents). In early childhood, we naturally emulate whatever is modeled for us. Furthermore, we may be unaware that the way things are done in our home is not the same as they are done in other homes. In fact, many children are surprised to discover differences as they become old enough to play and visit others.

Some of us may have grown up with parents who were very collectors or “keepers.” Every item that came in was worth keeping. We may have grown up hearing “You should never throw anything away because it might come in handy someday.” Perhaps some of us were reared by parents who struggled with hoarding disorder, causing our relationship with material possessions to be mixed up with shame or regret over the inability to invite friends over to play. In contrast, some of our parents may not have been able to stand visual clutter of any kind, saying things such as, “If I find any of your toys lying around I will throw them away” or “Toys in the playroom only.”

As with so many aspects of life, our parent’s beliefs, words and behaviors about belongings shaped our own expectations of what is normal and desirable.

A second way that our family of origin may have influenced our relationship with stuff is via the DNA that they passed on to us. The study of genetic influence on mental health is a relatively new field, so this idea is largely speculative on my part. However, there has been some research suggesting a familial component to conditions such as hoarding disorder and obsessive-compulsive disorder (OCD). The extent to which certain proclivities are genetic vs. modeled (nature vs. nurture) is unclear, and I imagine there will be further studies in this area. At the same time, it may be comforting to realize that some of the struggles we face with shopping, buying, shedding or storing could be coming from a source over which we don’t exert control. Rather than beating ourselves up over what comes naturally, it may be more helpful to acknowledge our genetics as a possible contributing factor, and then seek productive and positive strategies for moving forward.

The socioeconomic setting in which we grew up can have a large impact on how we relate to material possessions. On one end of the spectrum is the child who grew up in poverty, where the primary focus was on saving. The daily mantra may have been, “Waste not, want not” or “Use it up, wear it out, or make do without it.” An individual who grew up in this setting may struggle to release items, even if his/her life is now one of affluence. Similarly, a person who is reared with wealth and a lavish lifestyle may feel pressure to acquire, accumulate and maintain a certain “standard,” even if that is not what is practical or desired.

Once we are aware of how we have been influenced by our family of origin, it is next interesting to see how we have chosen to respond. I have observed that, in general, human beings tend to emulate what was modeled for them when they were young. This makes sense, as it would be exhausting to recreate all of our values, beliefs, patterns, choices, behaviors, etc. from scratch. In fact, the entire purpose of childhood is to gain skills and abilities upon which we can draw in adulthood. Parents are a child’s greatest and most influential teachers.

That being said, most people also tend to intentionally choose to a couple of specific areas where they plan to “do things differently.” Perhaps your mother constantly nagged you to clean up your toys, and you want your children to be able to relax and play without this constant pressure. Maybe your father was a slob, and you don’t want to embarrass your family the way you were embarrassed by him. It is possible that you fear repeating an undesirable behavior and overcompensate by going overboard in the opposite direction. Alternatively, if your parents different from one another in their views on belongings, you might align more with one parent’s style than the other’s.

At a recent gathering I challenged attendees to answering the following questions:

We had a wonderful discussion, sharing our memories and considering how they have shaped our relationship with the things we own. If you have never mindfully considered the impact of your family of origin on the way you buy, accumulate, store and shed items, I encourage you to consider these questions as well. They might make for interesting dinner conversation, fodder for a bit of journaling or even a goal or two.

Have you ever considered the impact that your family of origin has had on your organizing style? Have you chosen to do anything differently as an adult that the way things were done in your family?

18 thoughts on “Expectations and Your Family of Origin”

This site uses Akismet to reduce spam. Learn how your comment data is processed.